This year has already seen a lot of the media water down their content to avoid controversy or appease the sheeple who eagerly complain whenever something offends. Derf has an excellent rant this week about the sad state of comics censorship in papers, including a few weeklies. I agree with everything he says in there, except I would gladly quit the comics biz to write gags for Spongebob Squarepants, although I’d probably get canned for trying to make the sponge some sort of populist hero in a Bikini Bottom ruled by the corporate interests of Big Krabby Patty.

Derf will also be attending SPACE, where I plan on buying his latest compilation without coming off as some kind of lunatic fanboy.

UPDATE: Looks like another wave of Puritans has landed on Plymouth Rock. Tony Millionaire’s Maakies is the subject of the latest March of the Tipper Gore Brigade. Related TCJ thread.
Comments?

If it wasn’t for Greg Giraldo and the semi-frequent appearances of Todd Barry and other comics I like, I’d never watch Tough Crowd with Colin Quinn. Colin is a funny man, but apparently he doesn’t read any newspapers or only watches Fox News. Judging by tonight’s show, but any other show would certainly apply too, he actually claimed that Greg Proops, (an improv comic who I loathe), was making up facts about Ashcroft and what a shitty, shitty man he is. Here are some of Ashcroft’s worst offenses just off the top of my head:

Wire tapping everything you do on the intarweb.
Requesting the records of women who had abortions.
Holding Jose Padilla in spite of Habeas Corpus, a right guaranteed to even Timothy McVeigh.
Demanding the titty of a statue be covered up.
He has something against calico cats.
Refusing to fly on commercial airlines prior to 9-11, which, in effect, acknowledges a threat was imminent.

There’s a shitload of others, but I am lazy and hope you will actually read a newspaper, a cartoonist’s blog is no place to get your news.

I honestly believe there are decent conservatives in this country. But I also believe the majority of them are conservatives because they are uninformed, just like Mr. Quinn. However, he probably earns enough to make voting for a Republican in his economic interest, unlike the NASCAR dads, who apparently vote for whoever they think would be the best to have a beer with. If the natural course of politics, without Rovian smear mongering, was allowed to progress, John McCain would’ve been the republican candidate, and our country wouldn’t be the pariah PNAC has made it out to be. Anyway, enough preaching from me, just be sure to vote when it matters.

Edited to fix a last paragraph that didn’t make much sense.
Comments?

Thanks to Bravo’s two hours of programming between 4 and 6 am not devoted to metrosexuals or James Lipton kissing the ass of some hack actor who’s almost as young as me, I saw an excellent movie I never even heard of.

Those of you who know me are already familiar with the brainwashing I endured during the one film class I managed to sneak in while I was learning about the soul-crushing powers of robots. Those who aren’t will just have to imagine me endlessly babbling about how the seventies were the greatest era for American cinema.

Anyway, if you’re local Blockbuster carries it, rent Fat City, a John Huston (Angelica’s Dad, Noah Cross in Chinatown) film. It reminded me a lot of Nicholson in Ironweed, but had the added bonus of featuring a young Dude. It is definitely one of the most underrated boxing movies I’ve ever seen.
Comments?

Words can’t do justice to my excitement for Friday’s release of Dawn of the Dead, a remake of the Romero seventies classic. Normally remakes blow, but scientists have proven that every zombie movie is essentially a remake of Night of the Living Dead anyway.

If anyone’s interested, the USA network is doing a promotion for it Monday. You’ll have to sit through half an hour of Final Destination, which I still maintain is a masterpiece of intentional-unintentional comedy.

USA Network will air the first 10 minutes of the upcoming “Dawn of the Dead” remake Monday. Between 10 and 10:30pm, the network will interrupt its screening of “Final Destination” to give viewers a taste of the zomobie mayhem in a shopping mall. The Film opens March 19.

“Get that damn screwdriver out of mah head!” – Return of the Living Dead Part II
Comments?

A Cleveland snow plow driver made a sign that said “traitor” while blocking a street to help the president’s motorcade move without getting stuck in traffic. If people weren’t retarded, no one would’ve noticed. But the Ohio State Police has made a stink about it. Because you know, real crimes have all been stopped. All because his protest plow was too big to fit in the Free Speech Zone holding pen.

I’ve harped on how shitty the concept of a Free Speech Zone is for months, and can’t wait to see them fail gloriously in NYC, during the Republican convention which is shamelessly timed to coincide with 9-11.

I’m not claiming the Democrats aren’t going to pull the same shit during their convention here in Massachusetts. I’m sure their Free Speech Zone will be so far away from the Fleet Center, that I could walk to it from my house, which is twenty miles away from downtown Boston.

Someone should Freeway Blog 128 when their convention comes to town. I certainly won’t do it, someone might accuse me of being a hippie.

And we all know it’s the hippies’ fault that Free Speech Zones exist in the first place. The isolated holding pens started as an innocent way to sheild the public from their stupid puppets, corny rhyming chants, and pointless bucket drumming. It was only under the current administration that useful Americans have been affected. Who are useful Americans? I think we can all agree there is a line between hippies and people who have dissenting opinions but don’t smell like patchouli.
Comments? 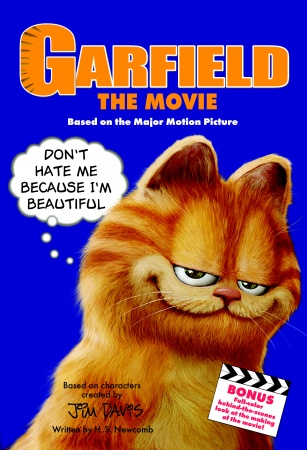 If this was fifteen years ago, I might be excited about the movie. I’ll even speculate that I’d order this novelized version of the movie from those Scholastic book order things teachers would give us when they wanted to go out from a smoke.

But now I know better. Although I still can’t bring myself to throw out my copy of “Adventures in Babysitting: The Movie: The Book”
Comments?

Here’s one more post before I give birth to next week’s comic. Then I’ll really get to work. Monday deadlines really blow because I always dick around all week, then get stuck inside for the weekend making the funny for the ungrateful masses.

How can you help my apparent hopeless lack of a work ethic? By getting BFW into a paper that has a Friday deadline. Of course, I won’t object to any weeklies with deadlines on other days of the week either.

It’s probably not even noticeable, but since The Cleveland Free Times was gracious enough to pick up BFW, I’ve stepped up the quality and time I put into the cartoon. Imagine how much more effort I’d put into it if more than beer money was at stake.

Writing your local weekly’s editor can influence their decisions. If a bunch of wingnuts can get Ted Rall pulled from the New York Times’ website, I’m sure a few pleasant emails can grease the wheels of BFW’s rise from obscurity.

Now I will heed the advice of the novelty plaque that hangs above my desk which reads “Quityerbitchin’.”
Comments?

Hey folks. You’re here either because you randomly clicked the logo on the BFW main page or this showed up in your referrer logs. Right now I’m too ashamed of having a blog to actually mention it in the weekly news update.

I’ve criticized blogs countless times, and I still think the majority of them are exercises in self-indulgence. However, the BFW website was in desperate need of regularly updating content in addition to the cartoon, and this is the easiest way.

I expect this to be nothing more than a dumping ground for jokes, complaints, and bon mots that I deem too crappy to bother putting into cartoon form.

Crap. This took forever to set up. There probably won’t be any more updates until next week’s cartoon is done.
Comments?

If you were ever curious why Big Fat Whale has maintained the look and feel of a website circa 1997, that’s the last time I bothered to learn any new HTML code, when I had a kickass Prodigy homepage. Sadly, The Wayback Machine never catalogued my pubescent ramblings. If it did, you’d see that it’s pretty much the same template I’ve used for BFW.

Anyway, this is just a test, but I modified the look of the page so it sort of fits in with the rest of the site.
Comments?